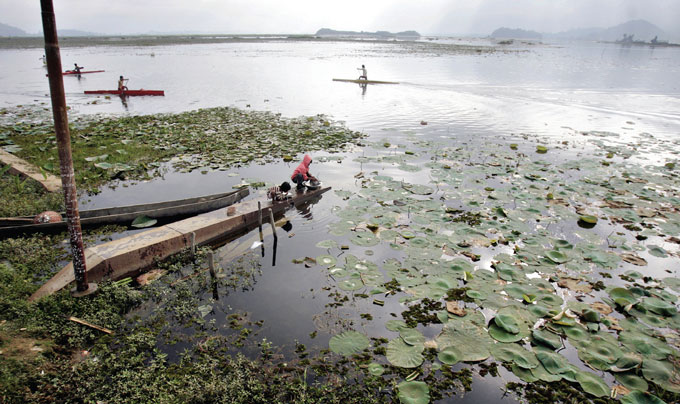 IN APRIL 2010, TEHELKA had reported how a company that existed only on paper was awarded a Rs 224 crore contract to clean up the Loktak Lake (The Lake and the Fake Firm) in Manipur. Chief Minister Ibobi Singh, who is also the chairman of the Loktak Development Authority, had rubbished TEHELKA’s findings and claimed the process of selecting K-Pro Infra Works Private Ltd, the company that was awarded the contract, was fair and transparent. Two years later, new documents give the lie to the CM’s claim and prove that the lake project is characterised by undue favours and flagrant violations of government norms.

On 5 August 2008, in a meeting attended by the CM, forest and environment minister, chief secretary and principal secretary (Finance), it was decided to allot a work order for “removal of phumdi from the Loktak Lake” to Hyderabad-based Progressive Construction Limited (PCL) on a trial basis for two months. No tender was floated, no auction held.

On 4 June 2009, the Loktak Development Authority (LDA) issued a tender notice inviting companies to apply for “Management of Phumdis in the Loktak Lake”. Phumdi, a water hyacinth, is choking the largest freshwater lake in the Northeast. Although CPWD norms require all tenders to give Hindi and English definitions of all local terms, the LDA tender notice (No. LDA/NIT/1/08-09) has no mention of what phumdi is. In a written response to TEHELKA, LDA Project Director Ibobi Singh (same name as the CM, but a different person) says that the English definition of phumdi was mentioned under the terms of reference for technical proposal. Why wasn’t it then mentioned in the main tender notification?

Not surprisingly, only one bidder showed interest in the project: Delhi-based firm, K-Pro Infra Works Pvt Ltd. Formed on 22 June 2009, K-Pro has a paid-up capital of Rs 10 lakh. The registered office in Delhi is a residential flat, where no one lives. For the Loktak project, K-Pro entered into a joint venture with Hyderabad-based PCL.

Interestingly, PCL is founded and controlled by Congress MP from Andhra Pradesh, K Sambasiva Rao. In April, PCL was named in the list of companies in a report prepared by the Institutional Integrity Unit of the World Bank on “fraudulent and corrupt” practices by private Indian contractors working on national highway projects funded by it. In Manipur, the company has been executing the dam components of the Thoubal Multipurpose Project. LDA Project Director claims that PCL had sufficient equipment and manpower to take on the lake project.

However, the project director’s statement leaves many questions unanswered. For one, why didn’t PCL directly apply for the job if it had the technical expertise? How did an absolutely unknown company, formed within days of the announcement of a multicrore project, manage to get the contract? What is the relationship between K-Pro and PCL? The project director says both companies entered into a joint venture for the purpose of contract tendering and execution.

The muck in the Loktak Lake may be cleared in a few months or years. But, who will clear the muck in the Lake project? Too many questions, too few answers.