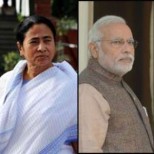 For an ordinary person outside Bengal, the aggressive attack by West Bengal Chief Minister Mamata Banerjee on BJP Prime Ministerial candidate Narendra Modi might have come as surprise. One would wonder why she is so miffed with Modi’s innocent comments on her painting. All he wanted to know was the name of the person who bought her painting. Banerjee even went on to call him a ‘shaitan’ (devil). This after her party spokesperson and Rajya Sabha member Derek O’Brien gave Modi the title of ‘Butcher of Gujarat’ and questioned his role in post-Godhra riots. The answer to this lies in the biggest scam to hit Bengal in recent times. Unlike the mainstream news channels, the Bengali media is abuzz with the name of the man who bought one of Mamata Banerjee’s painting for Rs 1.8 crore. It is none other than the chairman and the managing director of the Saradha Group Sudipta Sen, who is already embroiled in the scandal surrounding a chit fund scam in which thousands of investors lost their money and many have lost their jobs since the collapse of the group.

Relationship between the promoters of the group and Trinamool Congress has been widely reported. TMC members of parliament like Kunal Ghosh and Srinjoy Bose were directly involved with the media business of the group. Others like Transport Minister Madan Mitra headed the employees union of Saradha group. While Mamata Banerjee has tried to help the investors who lost their saving through government intervention, the scam continues to be an emotive issue in West Bengal.

TMC is expected to do quite well in the Lok Sabha Elections but is on a back foot when it comes to the issue of Saradha Scam. The party has managed to distance itself from its maligned MPs but an attempt by Narendra Modi to directly link Mamata Banerjee with the scam is not being taken lightly. Trinamool which so far has not been very aggressive against Modi, decided to go full fledge attack mode. Both the body language and the wording of the statements made by Banerjee and her lieutenants shows an aggression which we have not seen in recent times. In realistic sense, BJP stands no chance against TMC in West Bengal. Even much stronger parties like CPI (M) and Congress are on a back foot. Almost all pre-poll surveys have shown a near sweep for Trinamool Congress which has been in power in West Ben;gal for 35 months now. In spite of having broken away from the Congress-led UPA government both at the centre and in the state, the party has only grown stronger.

Time and again, Mamata Banerjee has made clear that she has no intention of going with the BJP. In one of the first rallies in Kolkata, Modi began by praising her. One thought it was his attempt to build bridges for a prospective post-poll alliance. After all TMC was part of the original National Democratic Alliance government during Vajpayee era. But Banerjee seemed to be in no mood to reciprocate. One cannot forget that she has to keep in mind her popularity among nearly 25% Muslim electorate in West Bengal. But still she nor her party ever used Modi as an electoral issue. Unlike the Congress in most parts of the country, or the JD (U) in Bihar, Modi is inconsequential in most of Bengal.

But it seems like the gloves are off now. Modi has hit where it hurts the most. And Didi is not the woman to take it lying low. Perhaps this will help her consolidate her Muslim vote bank which is seems as anti-Modi. And for Modi this will be an opportunity to make a mark on Mamata’s clean image or painting!