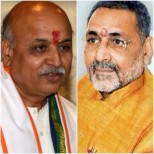 With less than a month to go for the Lok Sabha elections to conclude and a possible Narendra Modi-led NDA government at the Centre, there is growing rhetoric from the Hindu right. While Modi is going around the country talking about the sins of the UPA government and the failure of the Indian National Congress in the last 65 years, his men and women are talking a different language.

Two days after Bihar BJP leader Giriraj Singh threatened to send Modi’s critics to Pakistan, reports surfaced about the RSS’ appeal to the Hindu community to vote en bloc. Modi’s bête noire and fellow right winger Pravin Togadia has also added to the subtle communal pitch by making a statement against Muslims in Gujarat. We have already heard Modi’s right hand man Amit Shah’s ‘revenge’ statement in Muzaffarnagar. Shah was sent to all important Uttar Pradesh by the BJP prime ministerial candidate for his ‘administrative’ qualities.

Post the Muzaffarnagar riots, we have seen complete polarisation in India’s biggest state. In areas like western UP, traditional Thakur-Muslim vote banks of parties like Ajit Singh’s Rashtriya Lok Dal is said to have been broken. The Thakurs have suddenly woken up to their ‘Hindu’ identity to take ‘revenge’. Samajwadi Party supremo Mulayam Singh Yadav who had been completely absent after the riots, went to Muzaffarnagar to seek votes. He has been on record saying the fight this time is between the BJP and the SP.

In the last state elections, this reporter travelled around in the sugarcane belt which had been RLD territory. Elderly Jats smoking their hookas had praised Mayawati for good governance and giving jobs to younger Jat men in state police but when it came to votes, they were clear their vote always went to Chaudhury Charan Singh’s son. One wonders what happened in next two years. Is it able ‘administrative’ qualities of fake encounter accused Amit Shah or poor administrative qualities of the Akhilesh Yadav-led UP government? Or is it the ‘development’ model of Narendra Modi whom they prefer over the development that they witnessed for five years under another lower caste leader, Mayawati?

Honestly, it is difficult to understand what exactly the BJP and the Hindu right wing want. The Ram temple and cow may have moved to the last page of the election manifesto, but subtle Hindutva references abound. The fact that Modi is well aware of these contradictions and is also well aware that these are being noticed by voters comes across in his interviews and speeches. On the day the BJP manifesto was released, he made it a point to mention that he would never seek revenge. In the ANI interview, he spoke about respecting Muslim traditions even though he refused to wear a skull cap.

The fear factor – and let’s face it there is one among many voters – doesn’t come from Narendra Modi. The scare is from the other right wing elements. If one were to go back to the first BJP-led government under Atal Bihari Vajpayee, one cannot ignore incidents like Christain missionary Graham Stains being burnt alive by Bajrang Dal activist Dara Singh, or even the Godhra incident and the post-Godhra riots. All of it took place under the reign of ‘liberal’ Prime Minister Vajapyee. Both in Odisha and in Gujarat, the BJP was in power. The incidents in Karnataka cannot be ignored either. Under the first BJP government south of the Vindhiyas, we saw a steady rise of Hindutva forces in places like Mangalore, where churches were vandalised and women beaten up for visiting pubs. The likes of Pramod Muthalik grew under BJP state government patronage. The fact that the party even considered inducting the man (they later threw him out due to public outrage) only proves he has had the BJP’s sympathies.

Let’s say we ignore the subtle communal references in the usage of words used to attack Rahul Gandhi like “Biriyani” or “Shahzeda” (not “Rajkumar”). Let’s say we even ignore the blatant communal comments from likes of BJP spokesperson Meenakshi Lekhi on national television, perhaps in anticipation of the RSS’ appeals to Hindus. Let’s say we even ignore the RSS’ appeal itself. The question that comes to any sane mind is how will Narendra Modi control these men and women and focus on governance? Can Modi promise that no missionary will be burnt alive? Can he ensure no church is vandalised?

Modi’s supporters (the saner ones) tell us about how he sidelined Togadia in Gujarat or how he made governance more important than Hindutva, but the fact remains doing the same on a national scale is not going to be the same. Modi might want to focus on governance but for large majority of his core supporters his coming to power would be an opportunity to complete unfinished business from the Vajpayee era.

And as for those who still want to vote for Modi but remain sceptical of the Hindutva goons, let me articulate their sentiments by rephrasing Sonakshi Sinha from the Salman Khan starrer Dabangg: Aap se darr nahi lagta, Modi ji, Giriraj aur Tagodia jaise goondo se lagta hai!!!