If Manmohan Singh is the hero, Sonia Gandhi has to be the villain: The politics behind Sanjaya Baru’s book 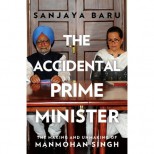 Those of us who have been part of the Delhi political journalism circuit are well aware of a slew of anti-Manmohan Singh pieces in all leading publications in the last few months leading up to the elections. In fact, even news organisations that have otherwise been known to be pro-Congress were seen to be blaming all ills that fell on the country on the good doctor. One wondered, what had suddenly happened.

I distinctly remember one particular week when all mainstream weekly magazines with similar covers attacking Manmohan Singh. There wasn’t even any particular incident that warranted such a sudden detailed coverage. Just recently, perhaps a week before the elections, I once again read an anti-Manmohan piece. This one blamed the prime minister for the trouble the Congress finds itself in today.

The gist of all these articles has been simple – the Manmohan Singh-led UPA government is not the same as the Congress party. The Gandhis – particularly Rahul Gandhi – are not to be blamed for the troubles of the government. Though Sonia Gandhi is the head of the alliance and the political mistress, no one can dare blame her. So, the natural scapegoat is the poor PM.

One has to read senior journalist and former media advisor to the Prime Minister Sanjaya Baru’s book The Accidental Prime Minister: The Making and Unmaking of Manmohan Singh​ in this content. While the entire Lutyens Delhi elite are debating whether it has been ethical on the part of Baru to release his book in middle of an election campaign, I believe the details of the book are more important than the timing of the launch.

For the first time we have someone who was in the know of things putting forward Manmohan Singh’s side of the story. It does not exactly glorify Singh, but it does clearly explain his predicament. Right from selecting his principal secretary to major policy matters, rightly or wrongly the prime minister has been dependent on Sonia Gandhi. BJP leader Arun Jaitley rightly tweeted that nothing in Baru’s book is unknown. Perhaps not unknown in Delhi’s political, bureaucratic and media circuits, but this book comes at a time when over 800 million Indian voters are selecting their next government and it is important for the electorates to know more about their outgoing prime minister. It is important to know about Singh so that the history can judge him better. It is important to know so that we can look at the one of the longest serving prime ministers in a fairer manner. It is important to know so that we can look at the accidental prime minister beyond the ugly collusive plug by the political and journalistic nexus. To quote Baru – When the story of his (Manmohan’s) life and achievements is fully told, he will be judged more fairly than now.

Baru’s book is also about how Indian bureaucracy works. It is also about how Delhi elite work. After Tavleen Singh’s Durbar, this is perhaps one of the few books that give us a peep into non-egalitarian democratically elected governments in Delhi. The writer himself is a part of the elite who has benefited from his contacts, some of which seems hereditary, including contact with former Prime Minister Narishma Rao.

Baru’s book is also about Sonia Gandhi and the Congress. And perhaps the reason for so much discomfort within the party and among the Gandhi family apologists in the media. Without giving out too much of what the book says, what one can say is, if the hero of the book is Manmohan Singh, the villain, inevitably, is Sonia Gandhi. (Senior ministers like P Chidambaram, who are otherwise unavailable for interviews or even to defend the parties in the run up to the elections, have suddenly jumped in to defend their party president.) Unlike Manmohan Singh’s former political boss Narsimha Rao, Sonia didn’t stand by Singh as much one would have liked her to do. Baru talks about the enormous pressure from the likes of Pranab Mukherjee and Arjun Singh on Rao to get rid of Manmohan Singh as finance minister, but Rao stood by him (incidentally, Rao also led a minority government).

Sonia, on the other hand, let her party men and women make a fool of the institution of the prime minister. Not only did Congress and non-Congress ministers surpass Manmohan Singh and deal directly with Sonia on key governance issues, Sonia failed to control party leaders planting stories left, right and centre against Manmohan Singh in the press. The idea, it seems, was to launch Rahul Gandhi and create a separate entity. The party and the government are different, we were told time and again. And look what Rahul Gandhi made of the party.

After the infamous Press Club incident in which Rahul Gandhi ‘tore off’ a cabinet decision, the same lot is now busy planting stories against their vice president. We will of course call it a struggle for the generational shift within the party.

Read the book. (It’s out of stock but e-copy available on Flipkart).